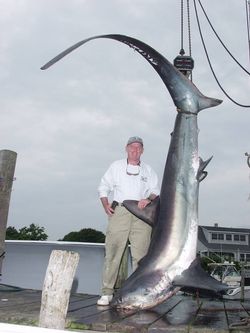 Biography: Capt. Bill Brown has held a 100 Ton Master Mariners License for  over four decades, and has fished from the Gulf of Maine, the Florida Keys and the islands of the Caribbean- including Cuba.  His customers aboard the "BILLFISH" have won or placed in numerous big game fishing tournaments throughout the Northeast. Bill's clients presently hold or have held five Rhode Island State Gamefish Records (all 5 taken in tournaments).  In addition, a 506 pound Thresher Shark that he guided his clients into helped win the 2003 Oak Bluffs (Martha Vineyard) Monster Shark Tournament that set a new MA State Record for that species in 2004 (broken in 2006).   He is an acknowledged expert for both inshore and- especially- offshore angling where his ability to capture big sharks is legendary.  He has been featured on local, regional, and national TV including ESPN, VERSUS, and NESN.

Capt. Bill Brown is also a well known, credentialed outdoor writer, and seminar speaker (Outdoors Writers Association of America, New England Outdoor Writers Association, Outdoor Writers Association of Connecticut).  His Power Point presentations and hands on demonstrations provide an overview of 'How To' in regards to tackle and techniques for both the inshore and offshore species of the gamefish that are found swimming in southern New England’s regional waters.  In 2014 Bill was asked to take part in two of George Poveromo’s Salt Water Seminar Series for the fourth time over the past decade.